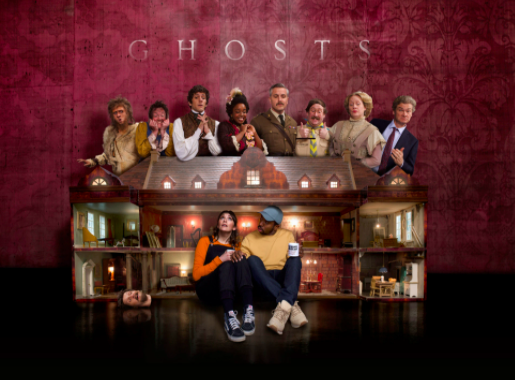 Ghosts has fast become one of our favourite English comedies of late. This article will help to reveal the best way anyone based overseas can join in the laughs and watch every episode of this BBC hit.

Now coming up to its fourth season, the BBC comedy series follows a collection of ghosts from different historical periods haunting a country house while sharing the house with its new living occupants– a young married couple, Alison and Mike.

Series 1-3 of Ghosts are hosted permanently on the British Broadcaster's streaming service called BBC iPlayer. Usually an exclusive service to UK residents, overseas fans can get streaming with our Beebs Chrome Extension!

Watch every episode of Ghosts on demand from anywhere abroad:

Once you've subscribed to Beebs, you'll be laughing in no time. And you will feel better for it.

In just a couple of clicks, any of the comedy series and movies found on Channel 4, BBC iPlayer and ITV Hub are there to be enjoyed.

Few countries are responsible for as many ground-breaking comedies as the United Kingdom. Ghosts is another comedy to add to the list.

Hilarious and surprisingly clever, the series is getting better and better as more episodes and Christmas specials are released.

For those curious about the comedy programme, check out the trailer below.

How many seasons are there of Ghosts by the BBC?

Since premiering in 2019, there have been three seasons of Ghosts plus a Christmas special. Series 4 of Ghosts was quickly commissioned by the BBC following the immediate success of season 3.

Ghosts season 4 is in the works and is scheduled to be released around September or October 2022. Of course, like with every season, season 4 of Ghosts will be available to stream online on the BBC.

So if you want to watch British TV from anywhere, be sure to subscribe to Beebs.

Where to watch the BBC TV series Ghosts?

The UK television series Ghosts is always found on the online streaming service BBC iPlayer. Those outside the United Kingdom can unlock access to the site by installing a Chrome Extension called Beebs.

Where can I watch the BBC's Ghosts in US?

Those based in the United States should try to access episodes of Ghosts on BBC iPlayer, which is the British streaming service. Quick access to iPlayer from America can happen with Beebs, which is a one-click download for Chrome browser.

How can I watch ghosts in Australia?

Australian fans of the BBC comedy series Ghosts should download a Chrome extension called Beebs. This one-click install guarantees full access to BBC iPlayer which hosts both old and brand new episodes of the series.

How to watch Ghosts (BBC series) in Canada?

Canada based fans of the hit comedy series Ghosts should download Beebs. This chrome download gives users full streaming connection to BBC iPlayer which is the permanent home of the series plus every BBC TV series that most Canadians know and love.