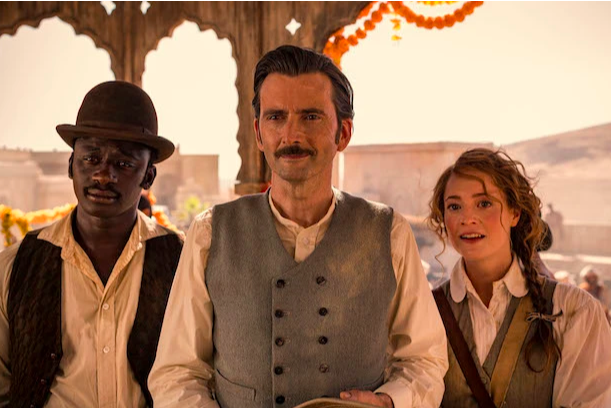 If you thought the BBC had enough TV dramas coming out this winter, think again. Though unlike the programmes that are set to go to air, this is based on a story many will already know and love.

Get ready for a trip across the globe in the brand new adaption of Around the World in 80 Days. Episode one of the eight-part series will released on BBC1 in the United Kingdom on 26 December 2021.

It doesn't matter if you you live outside the UK, we've made it possible stream the BBC iPlayer streaming service online from absolutely anywhere.

Simply install Beebs and you'll be streaming Around the World in 80 Days in no time.

This is the best way to start watching Around the World in 80 Days on BBC iPlayer:

Release Date and Trailer for Around the World in 80 Days: David Tennant Version

The series will air on BBC One and iPlayer online in the UK on 26 December 2021. The first season will be eight episodes in length, with the first episode available to stream from Boxing Day. The boxset will arrive on iPlayer in the New Year.

The book has been adapted or reimagined many times in different forms. In an amazing show of confidence in the television adaption, it has already been announced that the series had been renewed for a second season.

There are also many familiar faces that will help to bring the much-loved adventure novel to the small screen. In an amazing coup, David Tennant has been picked to star in the series as Phileas Fogg. No doubt that this will be known as the David Tennant version of Around the World in 80 Days.

The series will follow Phileas Fogg after making a £20,000 wager with snobbish members of the prestigious Reform Club that he can circumnavigate the world in just 80 days.

Mr Fogg is accompanied by journalist Abigail Fix. German actress Leonie Benesch will play in the role of Abigail Fix. Audiences outside of Germany will best know her from The Crown in which she played Princess Cecilie of Greece and Denmark.

Shivaani Ghai plays Aouda starred regularly in EastEnders and has been popping off in the Batwoman TV series. French actor Ibrahim Koma plays as Passepartout.

We've mentioned earlier in the article there's plenty of BBC shows coming out this Winter (including a few Christmas holiday specials). Those finishing up work before the Xmas break will have plenty in their streaming schedules to fill their time sitting in front of the telly. There's plenty more coming after Christmas too.

When it comes to UK television programmes, Australia is usually used as the source for a beautiful, exotic location for some reality TV. Rarely is it the source of horror. But this is the premise for the new series titled The Tourist. Beebs subscribers can start streaming The Tourist on 1st January 2022.